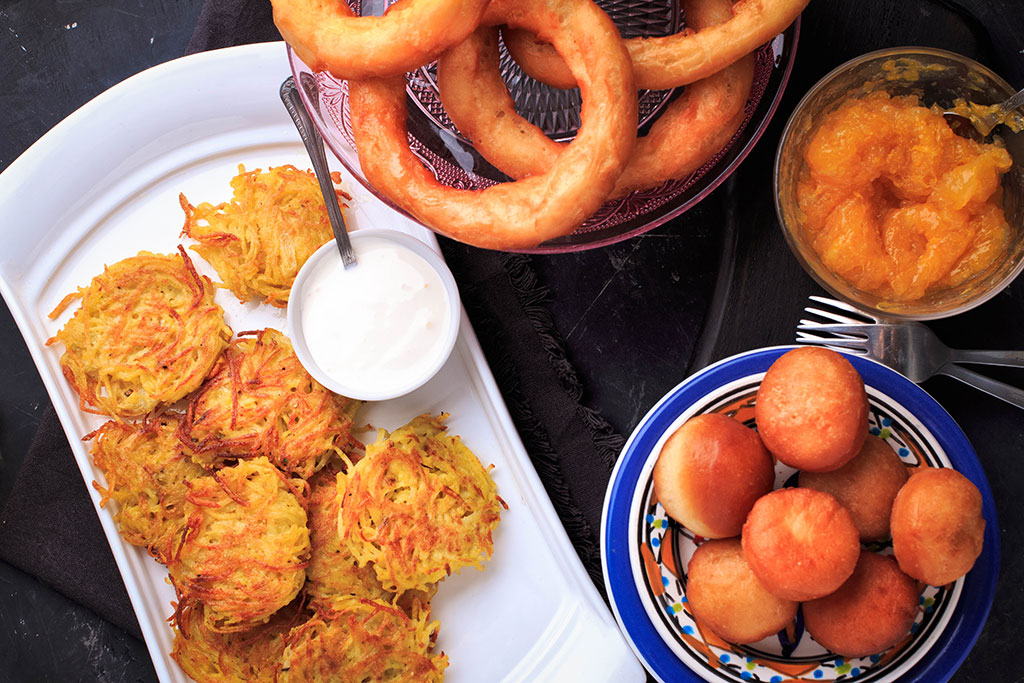 Chanukah is going to be a little different this year, no matter where you are celebrating. It might not be the first world-wide health crisis in the history of the Jews, but it is the first one in our lifetime.

Many of us will be having much smaller celebrations than we are used to, but we can still incorporate the traditions that pay tribute to the stories of the holiday – celebrating the Maccabees’ victory and the single-day allotment of oil for the Great Temple’s ner tamid (eternal flame) that lasted eight days. As with all Jewish holidays, there are some variations on the tradition throughout the diverse communities of Jews around the world, but because Chanukah is a post-Torah holiday, the traditions don’t differ quite as much as they do for other holidays.

Lighting the menorah is the practice that comes directly out of the story of the oil. Although most Americans use the much-less-messy wax candles in place of oil, some still use oil in their menorahs. Indian Jews use wicks dipped in coconut oil, which combines traditions of Chanukah and Diwali, the Indian festival of lights. In Afghanistan, Jews fill small plates or bowls with oil to create a sort of non-lighting menorah, which originated from the fear that they would be in danger if the light of their menorah attracted attention. And in Alsace, France there is a tradition to use a double-decker menorah, with 16 lights, so parents and children can light the same menorah.

And as with most Jewish holidays, many of the traditions are all about the food. The latkes we know today—shredded potatoes fried in oil – are a modern variation of the tradition. The original latkes were actually made from cheese. When potatoes became part of the Eastern European diet in the 19th century, the modern latke was born!

Of course, lots of things can be fried in oil, both savory and sweet. Black radishes were once a common part of the Eastern European diet, including being fried for Chanukah. Instead of potato latkes, Colombians eat patacones, fried plantains. In Turkey, Chanukah is celebrated with burmelos, which are fritters, similar to the potato latkes we know. More in line with the original cheese, Hungarians eat cheese buns known as delkelekh, and Italians eat ricotta pancakes for the holiday.

On the sweet end of the flavor spectrum, how many different ways do you think dough can be fried? A lot, as it turns out. In addition to the Israeli sufganiyot, which have been adopted by Ashkenazi Jews in Europe and the Americas, there are several Sephardic varieties of the sweet Chanukah doughnut. Bimuleos are fried dough strips; zalabiya are spiral fried pastries similar to funnel cakes. Greek loukoumades are little fried dough balls, as are Italian precipizi. Italians also have diamond-shaped deep-fried pastries called frittelle. Chanukah coincides with the harvest season for Jaffa oranges, so Moroccans’ ring-shaped sfenji have a citrus flavor. In North Africa, you can find debla, which is rolled to look like a rose before frying. And Indians eat a milk-based fried pastry called gulab jamun. In addition to being fried in oil, all of the pastries have the common thread of being dipped, dripped, dunked, or otherwise drenched in honey or syrup.

We might not be able to find all the different varieties of greasy treats locally, but as it turns out, they’re pretty similar to what we have always known.  Have a sweet Chanukah!

Wendy Jackler is the director of operations for Hebrew Helpers.

Want new articles before they get published
Subscribe to our Awesome Newsletter.

Hebrew Helpers is a nationwide Jewish Studies program that provides personalized education to students of all backgrounds and affiliations.